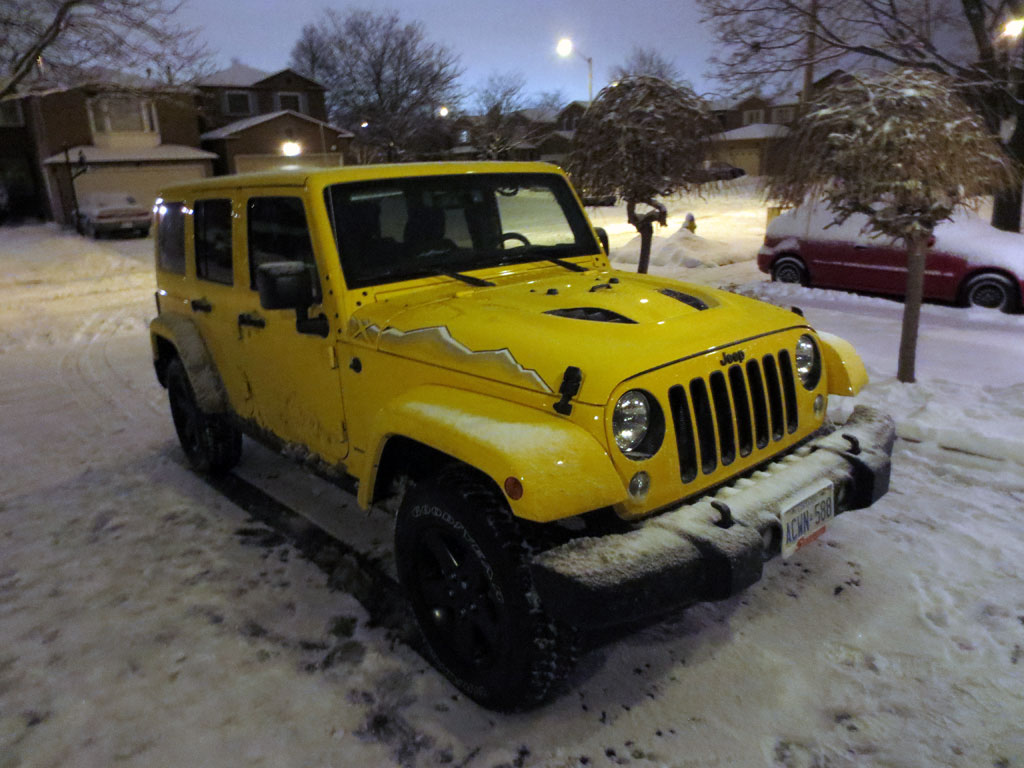 Last night was our first night with the Wrangler. The pics aren't very good, but it was pretty dark when I took them. For first impressions though… well… I don't hate it. I actually think I'll have a lot of fun with it in the future, once I grow more comfortable behind the wheel. She really is a monster! With our first night involving a blizzard, I got a chance to see how it handles the snow and I'm actually impressed. I know there's a bunch of computers doing all sorts of whiz-bang stuff with the brakes and throttle to keep it all straight… but she does go straight with no drama at all. Now, obviously it weights as much as a house so I need to leave lots of distance for braking and what not… but all in all it was pretty good on the stock tires. I also had a bit of fun doing full on opposite-lock drifting in 2WD with the TCS off until I got that look that says "You need to stop that now!"

So what the heck happened??

Our Mazda had been having issues for the past year or so and the needed repairs and maintenance were really starting to pile up. It was time to make the choice to either pour a bunch of money into it, or cut her loose. To be honest, now that I've got the Porsche in the garage, cutting it loose really wasn't hard.

With those issues in mind, I'm probably the only one you know that's going to save money on gas by buying a Wrangler.

Michelle and I had talked about it in the past and even went and test drove one in the summer just to see how much I'd hate it. The answer was "not as much as I expected to". I'm not a truck fan and she knows it so she never really pushed. She, on the other hand, has always loved Jeeps since she was young so really, it seemed only fair to make that dream come true. I mean… mine's already in the garage, right?

If I was miserable on the test drive, that would have been the end of it but I wasn't. If anything, I'd say I was just a bit bored. It felt like driving a tractor.

Last week we got to talking about the issues with the Mazda and the fact that the Canadian dollar is dropping drastically so car prices might jump up at any time. It might be time to do something.

We dropped by again to talk to the sales person we'd dealt with and I asked him a bunch of questions about some options I'd read about on the Jeep Canada website. He explained how most of them couldn't actually be ordered and that there seems to be some huge disconnect between the website and the ordering system. As it turns out, what happened is that a bunch of Jeeps got sent to dealers with an option package that was then very poorly represented on the website.

As I found out later… what ACTUALLY happened is a bunch of Wrangler X models got built and sent to Canadian dealers while Jeep Canada seemed to have no inclination whatsoever to actually have another model in their lineup and just called them Saharas. In the US, it's a separate model. They even had one at the Detroit Auto Show. I posted up a picture of it here.

Well… as it turned out, he had two of them on the lot so we went and had a look at them. One was black, and the other was this yellow one we bought. My first thought was that the whole package looked pretty badass. It's got the fancy hood from the top-trim Rubicon and a bunch of stuff blacked out that normally isn't. It's even got black wheels on it. It all looked pretty cool and we liked it. We asked him if he could look into whether he could find one in blue and then left it at that.

At the time I didn't yet know about this whole Wrangler X thing and neither did he. As it turns out, they're only available in black, white, red, and yellow. Here's a link to the details on the US website. http://www.jeep.com/en/limited-editions/2015/wrangler-x-edition/

So we discussed it and, while I've made plenty of school bus jokes, we decided that the yellow looked pretty wild and we'd be happy with that. I'll probably paint the fenders black at some point, but in the summer with the black soft top on it, it'll look great.

We made a decision on how much we'd be willing to pay and I emailed an offer to the sales person.

As it turned out, I was being a bit ambitious on what to expect in trade on our Mazda, but in the end, we probably did as well as we could hope for anyway, considering we also save the taxes when it's traded in.

We did some haggling back and forth and came to an agreement.

We went in on Monday to have them do an actual appraisal on the Mazda and to test drive this actual Jeep, and then signed the papers.

And there you have it. We no longer own a vehicle with a fixed roof. 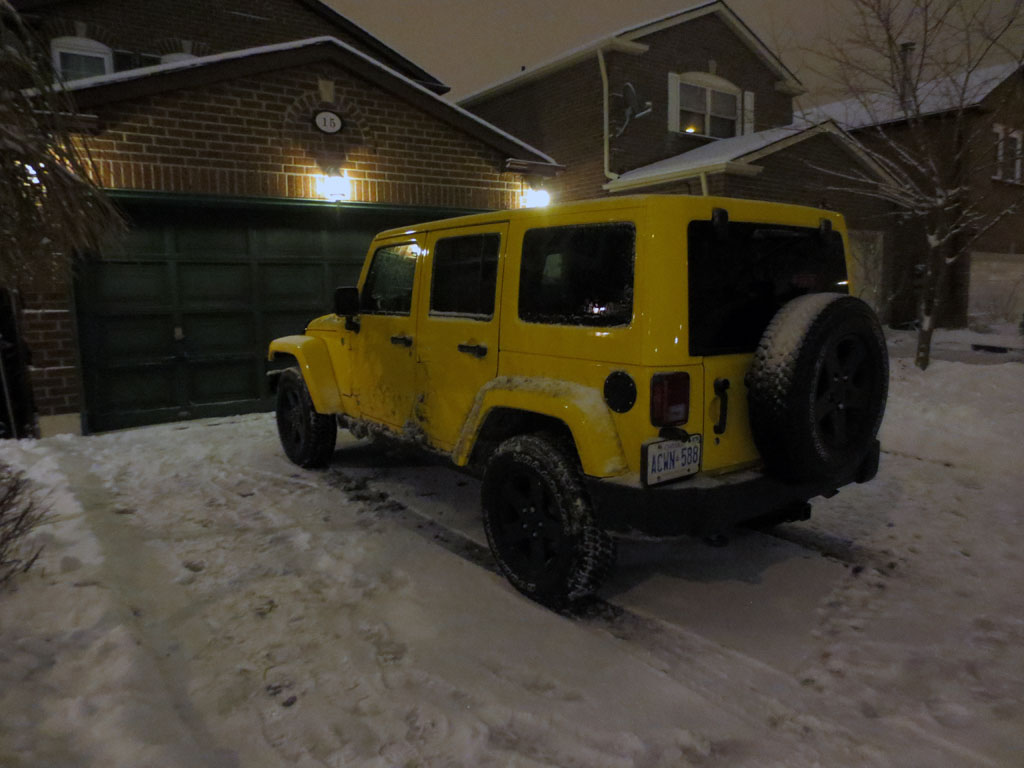 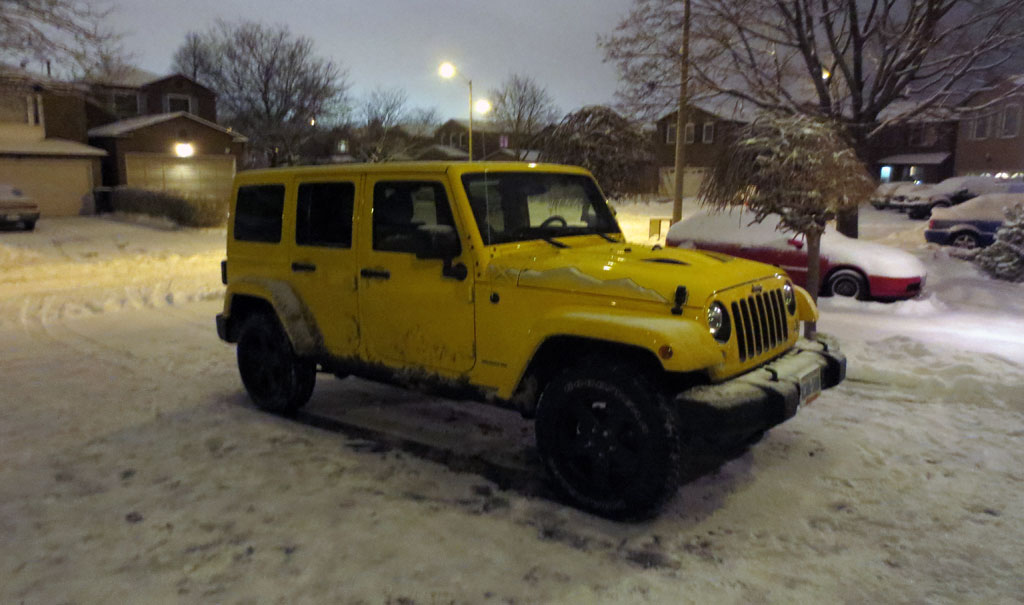 A story has just come up talking about how she tried to squash the big CBC story on RBC's outsourcing last year. From reading this, it's hard to tell whether she really did or didn't, so I found it hard to form an opinion of her actions based on that alone. What I DID do though was look up a story she did for the Globe and Mail on the subject. Here it is: http://www.theglobeandmail.com/globe-debate/lets-worry-about-skills-not-outsourcing/article11084876/

This is such a massive load of corporate shilling it hurts my head to even read it. I worked at RBC for 15 years and saw first hand what their outsourcing is all about, and I expect it's the same for all the other companies doing it. There wasn't even a tiny bit of it that had anything to do with finding people who were more qualified than those here in Canada. It was 100% about getting people cheaper. There were a few good people but most of them were woefully unqualified and needed to be spoon fed copious amounts of training just to get useful work out of them. But they were cheap.

This here is the most telling quote in her whole article:

"Information technology workers displaced in Canada are being replaced not by cheap Indian workers but by better ones. India has emerged as a centre of excellence in applications development, for instance, and so a business needing the very best in that field will seek it out."

That's not just vaguely untrue. That's a bold-faced lie that's easily verifiable by talking to ANYONE that's had to integrate outsourced workers into their projects.

She's not a journalist. She's a tool, and should be ashamed of herself.