The hockey game certainly lived up to its billing!

Congratulations, Canada, for Olympic hockey gold, and for winning more gold medals than any country has ever won in a winter Olympics.

I've been looking forward to Olympic hockey since the end of the World Junior Championship, but up until last night, there wasn't a whole lot of triumph.

Last night though, really provided something to cheer for. Not only did Team Canada dominate the Russians to get into the semi-finals, but Team USA's showing against the Swiss validated the results of the Canadian game as not being a harbinger of disappointment.

Sure, the US beat us for the bye to the quarter finals, but last night proved that we are still the powerhouse of hockey that we all think we are, and a rematch with the US for the gold medal will be a game for the ages!

Here's hoping they come out of the gates against Slovakia with the same gusto they showed last night. I can't wait!

They went and threw up a bunch of banners declaring their biggest ever anniversary sale, so the pic was too good to pass up.

I'm just going to assume that all their previous anniversary sales had ever larger mark-ups than this one. 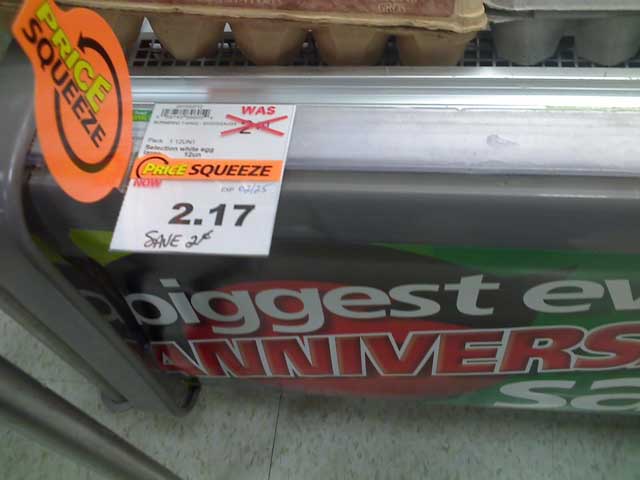 I don't pay all that much attention to food prices. For the most part, when I'm shopping for groceries I'll just throw stuff in my cart and pay for it. I might grab a few things I wouldn't have otherwise bought when they're on sale, but for the staples like milk and bread and eggs, I just get them.

Even though I don't pay much attention, when you buy things enough you tend to get an idea of what they normally cost, so as a consumer, I found it completely insulting when Food Basics decided to jack up some of their prices and then pretend that they'd lowered them.

Prices on things will go up. It's inevitable, and expected over time, so I don't fault them for that. What I find downright fraudulent though, is how they've done it.

I know that a dozen large eggs costs $1.97 and that 4L of milk costs $3.97. Imagine my surprise then when Food Basics raised their prices and then put big tags beside them saying "PRICE SQEEZE".

I guess there's no real definition for what a "price squeeze" is but just intuitively, I'd have thought it was a lowering of the price. I'll define it officially here, now. It turns out that what they really mean is "wallet squeeze".

For both the milk and the eggs, the price squeeze tag declared that they're reduced the price by, and I kid you not, TWO CENTS!!!!

Now, unless they put the price up an additional 2 cents for an hour or so before putting those tags on, then that's downright lying. I know what the stuff was. I buy it every freakin' week!

So there you have it. Food Basics is run by scammers who think their customers are idiots. From now on, whenever you see those "Price Squeeze" tags, you can go ahead and assume they've just raised the price and that you can probably get that thing cheaper elsewhere.