Well… maybe not so little… but either way, who the hell sets up on an overpass and just shoots at random people with a rifle??

The prosecutor doesn't yet know whether to seek the death penalty. Does this sound like the sort of person that gets rehabilitated? It's not like it was a crime of passion or anything. He just up and decided to try and kill people one day.

In a state that has the death penalty, I imagine this is the sort of candidate it's in place for.

But that's just me. I'm the guy who's tax dollars are keeping the likes of Paul Bernardo in a government hotel for the rest of his years.

Ah well. At least Chuck Guite's not getting that money. That rat bastard.

Well… I'm not going to grandma's house… but I'm totally stoked about getting out of the city for a few days!!

I'm debating whether to pick up a hunting knife and try my hand at bear wrestling or just stick with the regular plan of drinking myself silly and trying to keep my limbs out of the fire. This guy is my hero now. How cool is that?!

And just for Alia… here's the stinkin' rabbit. 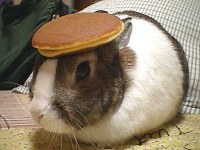 And guess what? It's dead. I read that while looking for the pic.

Of course, it wasn't dead when the pic was taken. That would just be disturbing.

There's nothing terribly interesting going on in the world today.

I'm really only writing this because I'm bored and hoping I'll write something that entertains me.

I'm still bored. And not entertained.

I add a caveat here… if this Liliane chick is an employee of our embassy in Lebanon or some such thing then she may have a point. I make these comments under the assumption that she is a vacationing Canadian like so many others we're hearing about on the news.

EDIT: I've just confirmed that she is, in fact, on vacation and thus, trying to blame our government for her own lack of planning.

From the Ottawa Citizen:

[blockquote]Ms. El-Helou travelled to her native country for a family vacation, but found herself trapped when the bombings started last week.[/blockquote]

After getting flown back to Canada on Prime Minister Stephen Harper's private plane, Liliane El-Helou had this to say:

[blockquote]She said that officials told her that they were not ready for that kind of an emergency. “Excuse me, if you are in Switzerland, a country that is not at war, an evacuation plan is the last thing you do for your employees,” she said. “But when you are in the Middle East, a volcano area where war could begin any time, you have to train your staff.” [/blockquote]

Well then! Excuse our government for not being your babysitter when YOU choose to go to a country that you yourself know that war could begin at any time!

I commend our government for putting their best efforts into evacuating people and I think those people should be HAPPY for it. If you choose to go to one of the potentially violent hotspots of the world, I think that YOU should have an exit plan in place for when bombs start dropping around you. It's not OUR responsibility!!!

Our government should and does help out where it can, but it is not obliged to SAVE YOUR STUPID ASS nor is it at FAULT when you don't like the way the rescue effort has gone.

I don’t want this blog to get a reputation for being all doom and gloom, so for today I’ll just post a picture of a cute little kitty.

Be happy. The world has enough miserable bastards without adding you to their numbers.

If it turns out that they're actually underestimating their abilities at stuff, I'd say we've probably only got a few months or perhaps merely weeks left before they completely take over the world… by accident… without realizing what they've done.

Today as I walked to lunch, I saw a pigeon get slowly run over by a Dodge Magnum. The car was pulling up to the curb to stop and a bunch of pigeons were sitting there. They all sort of scrambled out of the way but one was dumb enough to just sit there and the back tire went right over it.

If there was a story in the paper saying the city had decided to round up the whole lot of them and feed them through a wood chipper, I probably wouldn't bat an eye.

Hell, if the car had come barrelling by at 60 km/h and the pigeon exploded in a flurry of feathers, I probably wouldn't have cared.

Something about it just getting slowly crushed by the tire though really made me feel for it. Poor, stupid bird. Hopefully it's in a better place now.

I really wish I hadn't seen that right before eating.

You heard it here first.

Beating down the Palestinians is one thing. I feel for the innocent civilians getting caught up in the whole thing, but their militants ARE randomly firing rockets into Israeli towns so I understand the retaliation.

But Lebanon? Is Israel getting ready for another all-out war with a neighbouring sovereign nation?

Will this once again rally together all the surrounding Arab nations for a massive conflict?

Will this send our gas prices through the roof?

Israel's got nukes, so they can't be taken down. The Arabs know this. So what then are they trying to accomplish?? Armageddon??

Let's all pray this gets smoothed over quickly before it gets entirely out of control.

Is that just how the Oilers organization works? They only build decent players so they can sell them off rather than trying to build on their success?

Suddenly it sucks to be an Oilers fan. I never thought I'd be saying that this year!

[blockquote]Peca once regularly scored 20 goals a season as one of the NHL's best two-way players, but last season he had the worst production of his career scoring just nine goals and adding 14 assists in 71 games.[/blockquote]

Ah yes… welcome to the Leafs. Where great players come to die.

Hopefully it works out well for the Leafs so us fans can convince ourselves we've got a shot at the cup again. Not making the playoffs really puts a damper on that pipedream!